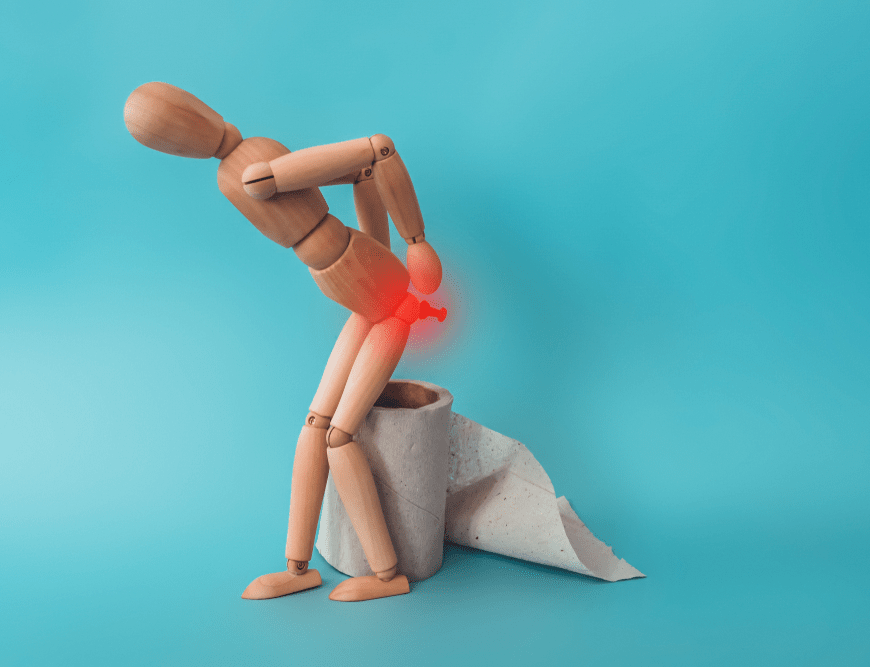 Who usually has such problems?

Anyone can be affected by this disease. People who lead a sedentary lifestyle – drivers and office workers are considered susceptible to this disease; people who do not follow a diet – abuse alcohol, spicy food, and regularly engage in hard physical labor, including some athletes – weightlifters shot putters.

Prolonged constipation is also a predisposing factor. Hereditary predisposition also plays an important role in the development of the disease. Often, the illness occurs during pregnancy, which is increased pressure in the abdominal cavity. Illness cannot be ignored. You should be aware of the pain and symptoms so that you can see a doctor if necessary.

Here are the main symptoms you should stick to:

If we talk about external hemorrhoids, then the symptoms are approximately the same in all cases. The only difference is intensity. For example, the patient may experience itching or burning. The bowel movement may be accompanied by bleeding. External manifestations in the form of swelling or partial prolapse of the rectum make hygiene problematic. A hygienic shower must be used.

Internal hemorrhoids are very often accompanied by bleeding. Patients may also complain of discomfort, burning and itching. It is worth paying close attention to the intensity of bleeding, since the resulting clots can lead to gradual tissue necrosis.

In addition to the family or congenital predisposition, there are many other risk factors for this disease. They are:

People with a congenital lack of venous valves in the visceral veins, cirrhosis of the liver, and tumors of the small pelvis are at greater risk of haemorrhoidal disease. WARNING! Blood clots, dark tarry blood in the stool, black stools – these symptoms usually indicate more serious diseases and require further investigation.

How to avoid hemorrhoids – the treatment

What is the hemorrhoid test?

If you suspect this problem, you should see your GP first. They should perform a simple rectal examination (finger through the anus), often performed in proctology, urology, and gynecology. Thanks to this, it is possible not only to diagnose hemorrhoids but also to evaluate the anus and organs adjacent to the rectum.

You need a proctologist (or a surgeon) who specializes in the hemorrhoids treatment (pain during defecation, fecal incontinence, blood in the stool, purulent discharge, mucus, ulceration).

Here is a list of procedures to identify a problem with your body:

Hemorrhoids in pregnancy and postpartum hemorrhoids

The causes of haemorrhoidal disease in pregnancy and after childbirth include enlargement of the uterus and pressure on the veins in the abdominal cavity and pelvis, physiological changes in the abdominal cavity; increase in venous pressure in the veins of the anus; chronic constipation; strong pressure during childbirth. A thrombosed hemorrhoid is also a serious form of this illness.

Treatment of this illness in pregnancy is limited (some drugs cannot be used in pregnant women), and conservative treatment is usually recommended until delivery. Hemorrhoids often disappear after pregnancy, but they can also appear after childbirth – due to the strong pressure during labor. Any changes in the anus should be consulted with a doctor.

The primary signs are similar to those of other diseases, such as:

How to treat hemorrhoids? It is difficult to overcome the resistance to revealing a “certain” part of the body, so we usually postpone the visit to the doctor. This is a mistake! The disease progresses slowly, so the sooner it is treated, the better.

Rectal bleeding requires immediate consultation. Who to go to? You need a general practitioner referral – a proctologist (a surgeon dealing with anorectal diseases).

The examination is often associated with an embarrassing, and for the elderly also quite dangerous, a knee-elbow position with buttocks sticking out. Today they are most often made in the left side position. This position does not cause discomfort.

The doctor is usually able to recognize it based on the history, the appearance of the perianal area, and the digital rectal examination.

At the end of the basic diagnostic examination, an anoscopy awaits you – the doctor carefully examines the final section of the rectum using a speculum (anoscope). Both tests are short-lived, require no special preparation, and are painless.

It depends on the severity of the disease. At each stage, it is recommended to drink 2-2.5 liters of fluid a day and a balanced diet that includes vegetables, fruits, and coarse products. But it’s better not to overdo the seeds as they can mechanically irritate the anus.

In all forms of the disease, the doctor may prescribe anti-inflammatory tablets that reduce itching and swelling and delay the development of lumps, ointments, creams, suppositories, and gels with a similar effect.

Soups bring relief, e.g., with oak bark or a marigold flower, warm baths (the water must not be hot) with herbs, e.g., chamomile.

When constipation is associated with hemorrhoids, stool bulking agents help. These methods are most effective in the early stages of the disease and support treatment in advanced stages. They need to be used for several weeks, as prescribed by your doctor. Hemorrhoid cream is a good remedy in the early stages.

How to get rid of hemorrhoids? When conservative treatment does not bring improvement or the disease is advanced, the nodules can be removed using one of the modern methods. As a rule, they do not require anesthesia because this body part is not sensitive to pain.

Sclerotherapy is a method of treating mainly small problems. A special preparation (e.g., foam) is injected under the mucosa around the enlarged nodule, which causes the formation of a blood clot at the injection site.

The malnourished nodule comes off. After the procedure, most people do not feel any discomfort, some – slight discomfort. In the first 2-3 days, there may be slight bleeding which stops spontaneously. The risk of complications is low – bleeding due to damage to the vessel, a small ulcer in the area of the bite that passes by itself, allergy to the drug.

Laser therapy involves irradiating the nodule with a laser beam. Under the influence of high temperature, the vessels contract and close, and consequently, the nodule tissue are destroyed. The procedure is performed on an outpatient basis and takes 15 minutes. The only ailment after the procedure is the feeling of a foreign body in the anus.

It is a non-invasive alternative to traditional surgery. It can be used in all phases of the disease. The procedure is performed on an outpatient basis or as part of a one-day hospital stay, usually without anesthesia (except for the use of a gel).

It is based on the selective closure of hemorrhoidal vessels. Under the control of a Doppler probe, the doctor sutures the arteries (they absorb themselves). It is a safe method, and it does not cause complications and minimizes the risk of disease recurrence.

Psoriasis – All You Need to Know

CBD – All You Need To Know About It